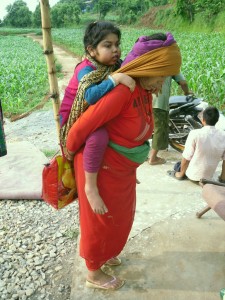 We had a very nice village woman just come now to Hope from Amarpur.. near Ganga’s home village… with a daughter who has very painful rheumatism all over.

According Pradid, our PT and a local doctor, she is in a critical state, he wants to see every past treatment before next stage… so we will put them in hotel ( it costs just $3 day including two meals) and hold them nearby while we get info first..

Anyhow they are of poor family and want to raise goats to pay for daughter’s education.. so we will give them both two female goats with two babies inside.. so that will start their small  business.. as the mother has no income..

The mother carried the heavy daughter a long way ..on her back… and now up and down our hill from Hope Centre to hospital… to see the doctor.. who has swollen cheeks and body from the rheumatism..

Update: The girl with arthritis is staying at the local hospital set up by the Hope Treasurer and 50 shareholders… and is having a new drug given her that is cheaper and less side effects than what she was taking… but she will be taking drugs for 20 or 30 years… the doc says…. so it is important to get one that has lowest dose..

It will take 4 or 5 days for her swelling to lower… then we can think about her school fees and goats for mother to raise…we gave food costs for her also while they are at hospital..

So many people have no savings… and usually take loans on their land.. at 20 to 30 % interest.. Or more…